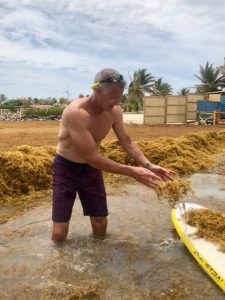 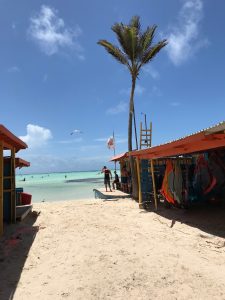 This article was first published in March 2018.  Sargassum continues to be a major threat to our waters.

Over the course of the last week at Lac Bay a sea of Sargassum has come in over the reef and invaded the bay, seagrass and shore. The invasion, described as a disaster by STINAPA, the environmental conservation organization that runs the national park is not the first of it’s kind. This is, however the largest sargassum invasion Bonaire has ever faced.

A massive clean-up is underway as well as a donation campaign by Stinapa to collect money for purchasing supplies related to the clean-up. The Sargassum consists of weed that has broken off from the sargassum weed floating in the enormous Sargasso Sea. Normally the sargassum seaweed would be considered a beneficial weed that floats in the waters of the North Atlantic. The problem lies in the fact that large chunks of the Sargasso Sea split off from the “mainland.”

Other mass influxes of Sargassum hit Bonaire in recent years but not of the severity of this one. Researchers say the algae blooms have exploded in extent and frequency lately, apparently causing the largest sargassum invasion Bonaire has ever seen. We don’t know what the future holds. Sargassum invasions have caused destruction on other Caribbean islands and also in the US since around 2014.

Marine Biologists currently study this phenomenon to better understand the trends and patterns of this seaweed and what can be done about it.

Cleaned up but not the same

Update: Lac bay is back to it’s former beauty and splendor. There are tiny bits and pieces of Sargassum weed found here and there but certainly a world better.

See the photos at the top of this post from March and July 2018. The photo of the group clean up in March 2018 is the same spot as the photo next to it with crystal clear water and the palm tree. The little pathway where windsurfer’s normally take their gear out into Lac Bay from Jibe City to go windsurfing couldn’t be breached during the invasion. In March the weeds blocked any entry. Volunteers worked night and day to clear the sargassum and save reef animals. Lac Bay now looks like it’s old amazing, crystal clear turquoise self. However, the seagrass, for years protected by rope barriers put up by conservationists is all but gone.

Beginner windsurf Lessons on Bonaire. The best place to learn to Windsurf